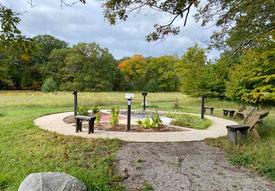 **When attending this teaching, their is no alcohol or persons who have consumed alcohol allowed into this space on this day of teachings!

The purpose of the Medicine Wheel is to bring balance, cleansing, and a connection to Mother Earth! Offering of Native Tobacco and prayers will be included in this teaching!

The words of the 4 directions, in the Anishinaabe Language will be in this teaching and pronounce each direction as we smudge the circle with the sage we grow in the western direction! Including the reason for the smudge.

The Medicine Wheel is  also a teaching of the circle of life, starting with the New born, to youth, to middle age, to elders .

Native songs and drumming will also be a part of this teaching!

The Medicine wheel goes back to the beginning of time, as the Native culture began their day with the rising sun and the 4 sacred medicines.This was all taken  away from the Native people by the government and so their traditional ways ended. At this time it was against the law to continue to use their language and continue to do their ceremonies. In order for the Native people to continue their teachings, the medicine wheel was hidden, not to show anyone their cultural ways, or they would be taken away! 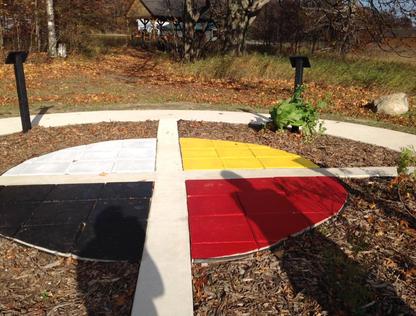 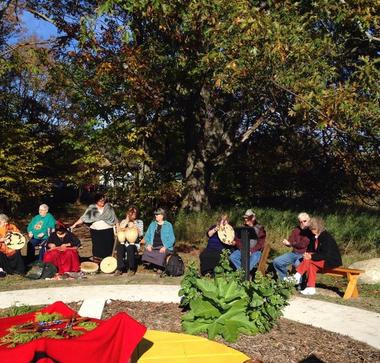 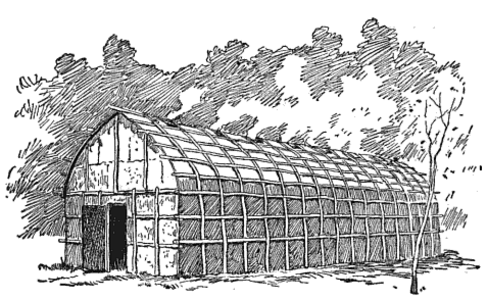 The earliest occupants of the Mackinaw Area, known as the Anishinaabe (or first people), have had to adjust to political, economic and cultural changes resulting from the arrival of Europeans, beginning with the fur trade and followed by population pressures and territorial loss.  The challenge over the last 300 years has been to adapt to these new conditions while still maintaining the core values, beliefs and life styles.

The adjustments for the Anishinaabe, the Odawa, the Ojibwe and the Potawatomi (further to the south) were particularly great during the period of Heritage Village (1880-1917) due to the decline of the fur trade and loss of land through imposed treaties with the U.S. Government.  This necessitated a greater emphasis on fishing, agriculture, carpentry, lumbering, handicraft and the supply of basic food and medicines harvested from the land of Northern Michigan to the European community.  Intermarriage was common and the difference between “Indian” and “Settler” became less and less distinct.  Many families in Emmet, Cheboygan and Mackinac counties proudly recognize their Anishinaabe ancestry.  The Anishanaabe homes at Heritage Village reflect this continuity, being both part of and apart from the other buildings in the Village.

Historically, the Anishinaabe lived in wigwams (also known as wickiup or wetu) often longer than the wigwam at Heritage Village.  During the time of Heritage Village, many Anishanaabe began building and living in log houses, like the Detweiler farm house, or plank houses.  While traveling, the Anishinaabe used both temporary wigwams and conical teepees, originally developed by Indians of the plains. ​

For centuries the Anishinaabe Bands, including the Odawa, the Ojibwe, and Potawatomi, were traders throughout the Great Lakes and even west of the Mississippi River.  In the 17th and 18th centuries they traded with European fur traders in a symbiotic relationship – exchanging items necessary to both their ways of life.  In the first half of the 19th century, following the War of 1812, the Anishinaabe people recognized their culture would be affected by the westward expansion of American settlers.  The young country adopted a resettlement policy - moving Indian bands and tribes off their traditional homelands to reservations west of the Mississippi River.  The Anishinaabe bands, in particular the Odawa and Ojibwe, determined to stay in the woodlands of the Great Lakes, and began an adaptation they hoped would allow them to stay alongside the incoming settlers.  They pursued treaties and ceded interest in lands in exchange for keeping land at the heart of their culture. They sought education in the ways of the settlers and adopted Christian religions. Most importantly, they left behind a way of life that involved seasonal travel and focused on land ownership, agricultural pursuits and maintaining rights to fish, hunt and harvest natural foodstuffs in the northern Michigan area.  Since they no longer had a lifestyle that involved moving long distances annually, they built more permanent villages.  They negotiated lands in trust and purchased land. They still pursued fishing and hunting in summer campgrounds, but they returned to permanent villages and farmsteads for fall, winter and spring. It should also be noted that despite accepting organized religions presented by the settlers, the Anishinaabe people continued to cherish long-time cultural and spiritual ceremonies and beliefs. Artisans created traditional pieces for sale to settlers, first for everyday use and then as tourist items for seasonal travelers who came for vacations. The Anishanaabe attempted to establish a legal and trust relationship with the Federal and local governments in order to preserve their historic and cultural heritage.  However, during the years between the Civil War and the American entry into the First World War the American government and avaricious land developers betrayed that relationship. And still, the Anishinaabe persevered.

In 2014, the Mackinaw Area Historical Society applied for and was awarded a grant from the Michigan Humanities Council to plan for an Anishinaabe presence in the Heritage Village, reflecting the adaptive transition of the native culture during the village time period, 1880 to 1917.  The grant supported a series of interviews with and presentations by specialists, both indigenous and academic, with knowledge of the native culture in the Mackinac Straits area.  These interviews placed the Anishanaabe, the first people, in historical context and provided insight into their adaptation to European settler’s culture.

The proposed Anishinaabe Homes exhibit will include a plank house, a portable tipi, and a permanent, traditional Medicine Wheel.

Typically these houses were 16 by 20 feet and constructed of found materials.  The main floor provided living space and a second floor loft was used for sleeping. There was an east-facing front door and several windows. The floor, often dirt, had a fire and a simple chimney or smoke hole in the roof that provided heat for cooking and warmth.   Some houses had an open “lean-to” addition.

The Anishinaabe Presence Committee is proposing to construct such a house and lean-to that would provide exhibition space as well as space for programs, ceremonies, cultural exchange and creation of artifacts.

This construction will illustrate the use of a transportable wigwam used for the continued seasonal camps used to collect berries, fish, and game to sustain the bands year-round.  The wigwam will consist of a framework with deer hides as covering. The framework will be made of wood harvested from the Historic Village and tied by volunteers. The hides will be procured from local hunters.