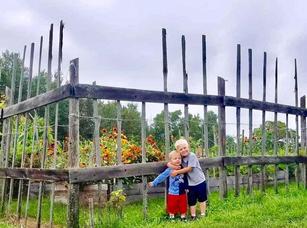 ​
According to Iroquois legend, corn, beans, and squash are three inseparable sisters who only grow and thrive together. This tradition of interplanting corn, beans and squash in the same mounds, widespread among Native American farming societies, is a sophisticated, sustainable system that provided long term soil fertility and a healthy diet to generations. Growing a Three Sisters garden is a wonderful way to feel more connected to the history of this land, regardless of our ancestry.

Corn, beans and squash were among the first important crops domesticated by ancient Mesoamerican societies. Corn was the primary crop, providing more calories or energy per acre than any other. According to Three Sisters legends corn must grow in community with other crops rather than on its own - it needs the beneficial company and aide of its companions.

The Iroquois believe corn, beans and squash are precious gifts from the Great Spirit, each watched over by one of three sisters’ spirits, called the De-o-ha-ko, or Our Sustainers". The planting season is marked by ceremonies to honor them, and a festival commemorates the first harvest of green corn on the cob.

By retelling the stories and performing annual rituals, Native Americans passed down the knowledge of growing, using and preserving the Three Sisters through generations.

Corn provides a natural pole for bean vines to climb. Beans fix nitrogen on their roots, improving the overall fertility of the plot by providing nitrogen to the following years corn. Bean vines also help stabilize the corn plants, making them less vulnerable to blowing over in the wind. Shallow-rooted squash vines become a living mulch, shading emerging weeds and preventing soil moisture from evaporating, thereby improving the overall crops chances of survival in dry years. Spiny squash plants also help discourage predators from approaching the corn and beans. The large amount of crop residue from this planting combination can be incorporated back into the soil at the end of the season, to build up the organic matter and improve its structure.

Corn, beans and squash also complement each other nutritionally. Corn provides carbohydrates, the dried beans are rich in protein, balancing the lack of necessary amino acids found in corn. Finally, squash yields both vitamins from the fruit and healthful, delicious oil from the seeds.

Native Americans kept this system in practice for centuries without the modern conceptual vocabulary we use today, i.e. soil nitrogen, vitamins, etc. They often look for signs in their environment that indicate the right soil temperature and weather for planting corn, i.e. when the Canada geese return, or the dogwood leaves reach the size of a squirrel’s ear. You may wish to record such signs as you observe in your
garden and neighborhood so that, depending on how well you judged the timing, you can watch for them again next season!

Early European settlers would certainly never have survived without the gift of the Three Sisters from the Native Americans, the story behind our Thanksgiving celebration. Celebrating the importance of these gifts, not only to the Pilgrims but also to civilizations around the globe that readily adopted these New World crops, adds meaning to modern garden practices Success with a Three Sisters garden involves careful attention to timing, seed spacing, and varieties. In many areas, if you simply plant all three in the same hole at the same time, the result will be a snarl of vines in which the corn gets overwhelmed! 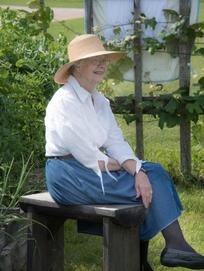 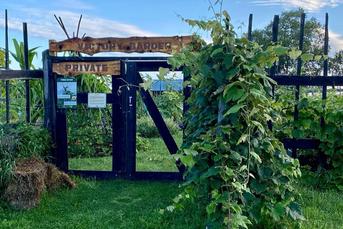 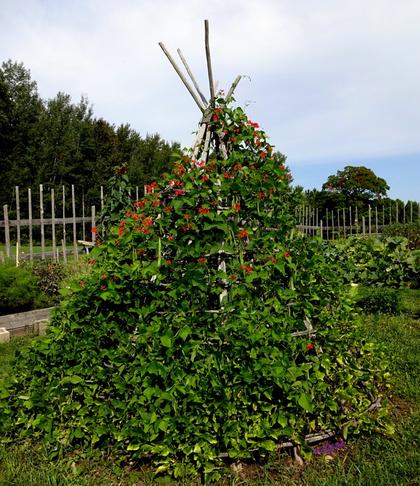 Farms of the 1880’s had kitchen gardens where fresh vegetables and herbs were grown for cooking.  Local families used the gardens to supplement their tables in difficult times. The garden at Heritage Village was established in 2009 and is a reconstruction of a typical Mackinaw kitchen garden.  The fence around it is built of sticks and is tall enough to keep deer out.  We also have an old fashioned bean pole that looks like a tee-pee and is a replica of one used in Mackinaw City.  It would have had climbing vegetables planted on the inside with easy access to harvest and tend the plants.

The Community Garden has been very popular with the Community as well providing gardening plots to others who come to enjoy the outdoors with their neighbors and collect their freshly grown vegetables as a bonus.  ​

Heritage Village has a Community Garden where local school groups could come to learn and garden in a plot they have cultivated and planted.   Every Monday morning the children and their moms gather in period costume to work their Children’s Garden.   It is a fun time outdoors as they see and discover what may have grown from week to week.  They are joined by local volunteer Master Gardeners. They learn about what crops would grow in a Northern climate where temperatures and a short growing season are a challenge.  The children end their Monday morning gardening with a snack of fresh vegetables they have grown.   It is always enjoyable to see them try the things they have grown and remark how fresh they taste.