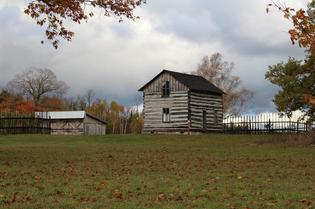 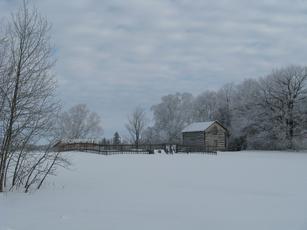 ​​Local dirt farmers were poor and often built their homes using the trees on their farms.  The village's log home was built by Christian Detweiler about 1883. Detweiler was a farmer and a carpenter, as well as a Mennonite minister. He helped others build their homes as well as the local Mennonite church built in 1885 which is still standing one mile west of US 31 on Brutus Road.  Christian, his wife Susan, and generations of relatives are buried behind the church. One of his daughters told how, as children, they would lay the floorboards in place in their new home for their father to nail when he returned from work in the evening.​

Volunteers have fully restored the exterior of the log home by re chinking the logs and replacing deteriorated wood.   Work on the interior two rooms is in Originally this house had only an extended stovepipe through the roof to serve as a chimney. This often caused fires. There was always a ladder and pails kept near for the family's protection.  In case of fire, the children were taught to draw water from the well with the always ready buckets, and carry them up the ladder to their mother waiting above. She always succeeded in putting out the fire with their help.  The farmhouse was moved from Brutus, 13 miles south of the village.   Restoration includes preserving the home’s historic structure, wall coverings, the bead board in the eating room and period furnishings.  Family descendants are assisting with interpretation of the family’s history.​