Like the pest house, this structure is another inexpensive building with a shelf chimney, this one suspended on an interior shelf. Robert Frost wrote the following poem about his dislike of a shelf chimney.

The Kitchen Chimney, by Robert Frost

Builder, in building the little house,
In every way you may please yourself;
But please, please me in the kitchen chimney;
Don't build me a chimney upon a shelf.

However far you must go for bricks,
Whatever they cost a-piece or a pound,
Buy me enough for a full-length chimney,
And build the chimney clear from the ground.

It's not that I'm greatly afraid of fire,
But I never heard of a house that throve
(And I know of one that didn't thrive)
Where the chimney started above the stove.

A shelf's for a clock or vase or picture,
But I don't see why it should have to bear
A chimney that only would serve to remind me
Of castles I used to build in air. 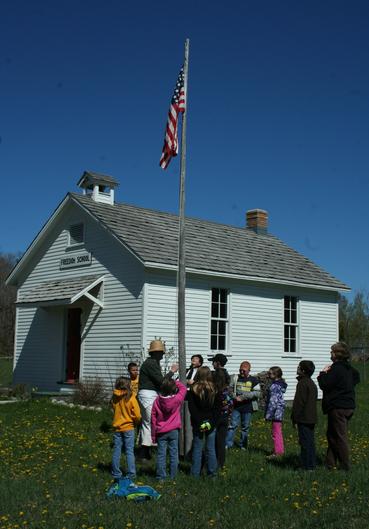 The Freedom School in Heritage Village was one of two schools that replaced Mackinaw City's original log cabin school, built in 1871.  This replacement school, built in 1885, was located in the town of Freedom near Mill Creek Park on what is now US 23 southeast of Mackinaw City. There is a small sign on the north side of the highway that marks the site of the now extinct community. Until the 1930s the Freedom School educated many students in the area. The building was sold in 1949.

The Historical Society discovered the dilapidated school building in the woods, its floor so rotten that it had "melted" into the mud beneath it. After the owners donated it to the MAHS, an architect advised the society, "Any building can be saved; it is only a matter of the amount of work you want to do." That was enough inspiration and encouragement for MAHS members to attempt to restore it.