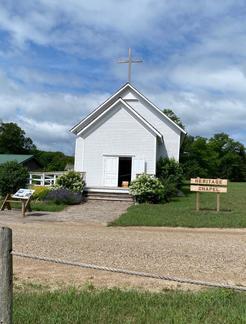 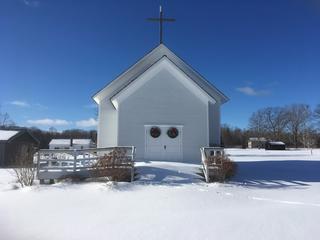 The 1890’s Zion Evangelical Church, German, now gracing the grounds of Heritage Village was located in the local town of Brutus for 120 years.

The church had its beginnings in the labors of six German families who settled the land around Brutus.  All services were in German until English sermons were occasionally allowed in the early 1920’s.  The first wedding there was held in 1902.

The church was closed in 1960 when a new church was built. Following nearly 50 years of being used as a storage facility, the old church had badly deteriorated and could no longer be maintained by the congregation.

In 2010 it was cut into sections, moved to Heritage Village where it was re-assembled and society volunteers began work on restoration.  The entire exterior will be as it appeared in 1897 right down to the window frames. Total renovation was expected to take at least two years and was completed in the summer of 2013.   As outside work neared completion, a portico for handicap access was added. On September 22, 2013 it was reconsecrated as a house of worship.

In October 2012, shortly after sunrise, a new cross, built by Bud Stone and virtually identical to the old one, was installed on the church by local builder Dennis Flemming. The Mackinaw City Fire department provided a welcome assist to place the cross on the top of the building just as the sun positioned itself perfectly behind it.  After a blessing by Pastor David Wallis of the Church of the Straits, the cross was guided into place from the ground by Bill Marvin, then president of the Mackinaw Area Historical Society.

Aside from the portico entrance, the rest of the structure is unchanged.  Like the original, the new cross will not have been painted, stained, or treated with chemicals but will be left to weather with the elements. The completed church has been reconsecrated as a house of worship and is being used for wedding services, funerals, assemblies and other public functions.